This summer, or winter in the south hemisphere, I went to visit my family who live in Santiago, Chile (I wrote a few posts on Santiago if you haven’t read them yet). I stayed there for about 2 months. My family likes tourism within the country they live in- to get to know the place they live in a little bit more, so we decided to visit probably the second most popular location in Chile after the Easter Island, Atacama Desert.

The Atacama Desert is in the north of Chile, in bordering with Peru and Bolivia (some tour companies can take you to Bolivia’s famous Uyuni Salt Lake from here). The desert’s aridity can be explained by its geographicallogicallfie with it. f rock bellow the middle Virgin Mary, was destroyed s together, ood pictures. location; between two mountain ranges; the Andes and the Chilean mountain range. Both mountain ranges have an altitude high enough to create what is called a “rain shadow”.

We took a flight to Calama, about 2 hours from Santiago, then an hour car ride to a town called San Pedro de Atacama. Here you can find many hostels, restaurants, souvenir shops and tour companies where they usually accept walk-ins. You have to be careful if you are prone to altitude sickness because the town has an altitude of 2400m and most of the popular tourist attractions are located in areas with an even higher altitude.

I forgot to take photos of the village so I’ll leave this photo of my brother and a cat, you can get an idea of how the hostel we stayed at looks like. 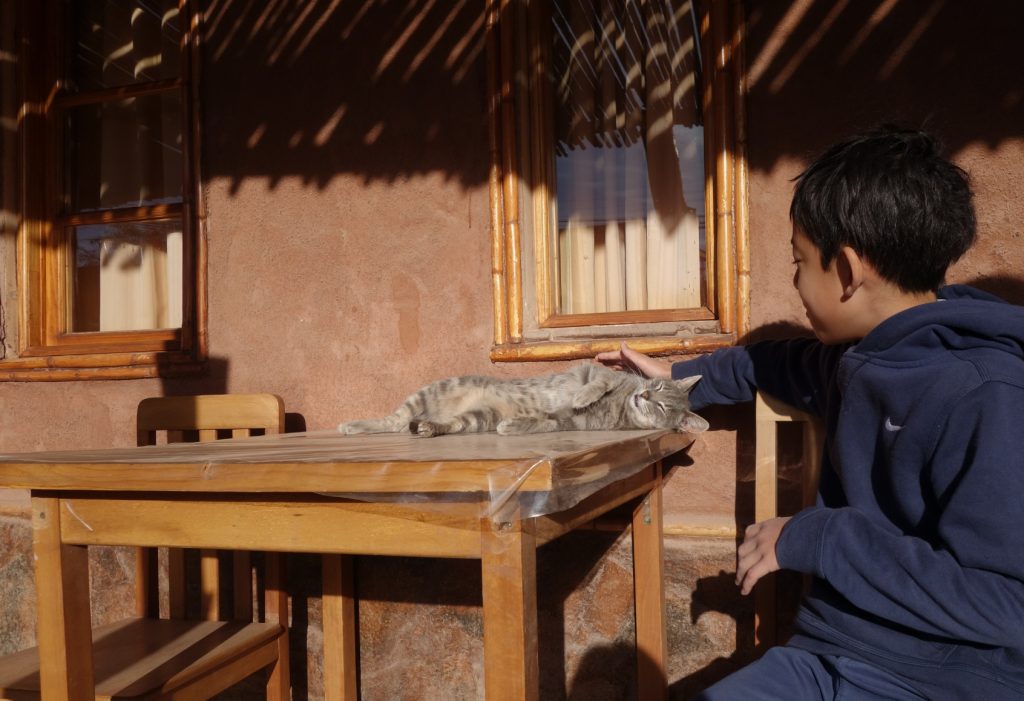 Our first destination was the “valley of the moon”, a rocky terrain known to resemble the surface of the moon, thus the name. The Atacama Desert has been used to film Moon and Mars scenes in movies such as The Space Odyssey. 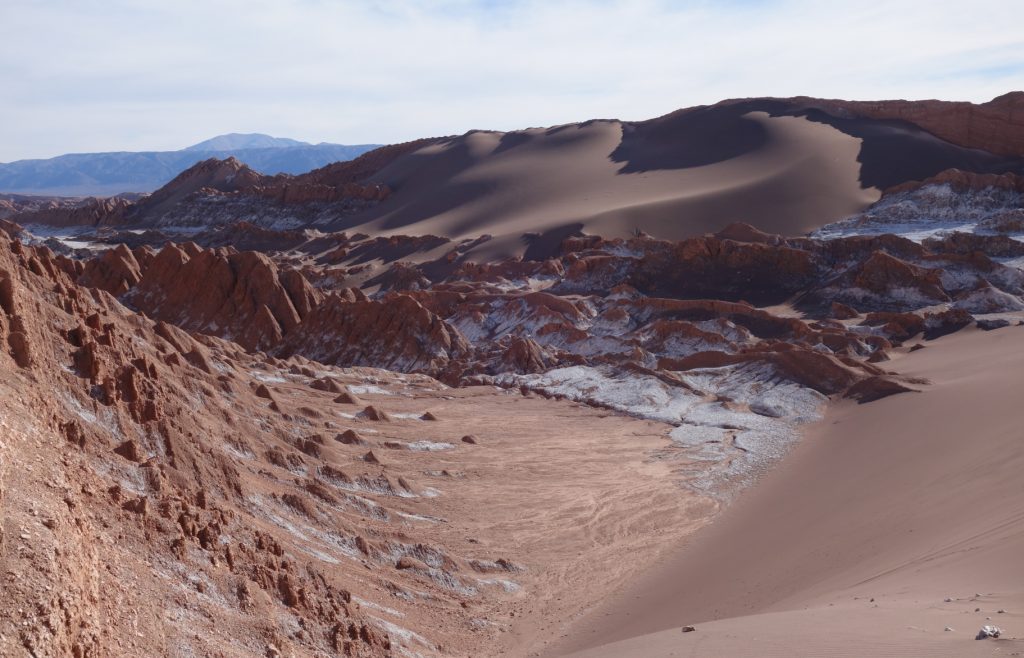 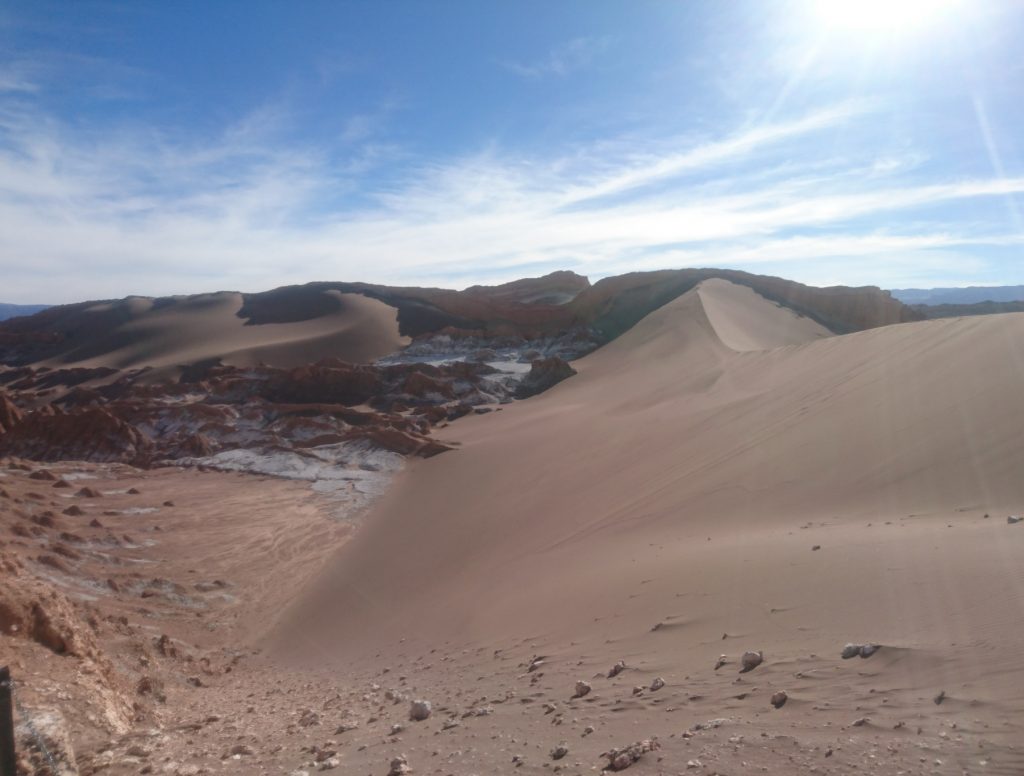 Then we headed to see these rock formations called the Three Mary’s. The rocks are supposed to look like the 3 Mary’s in the bible. The block of rock on the right side is supposed to look like her kneeling down, the one in the middle is her looking up while holding baby Jesus, the little triangular piece of rock bellow the middle Mary, was accidentally knocked down by a tourist trying to take a selfie with it. 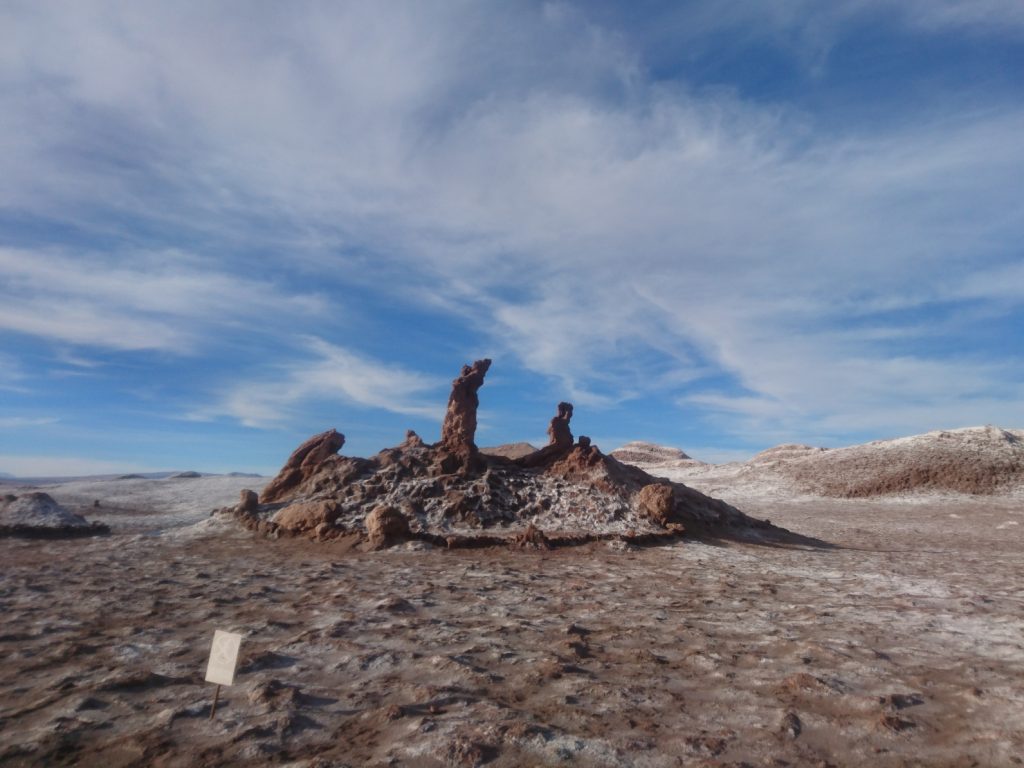 In the afternoon, we went to a hill where we could see the sun set on the Valley of the Moon. 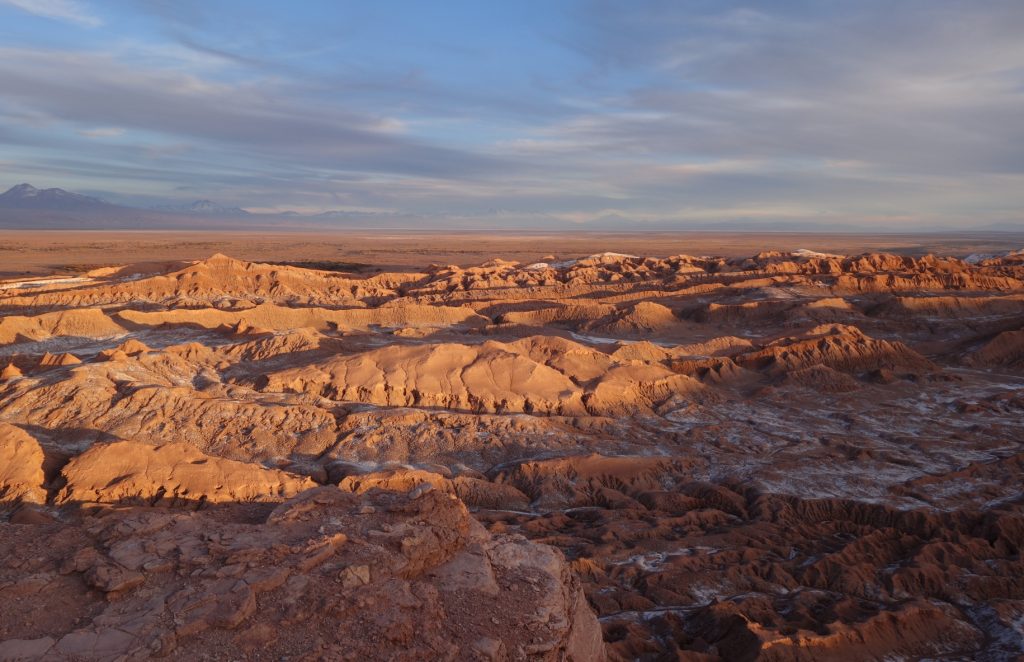 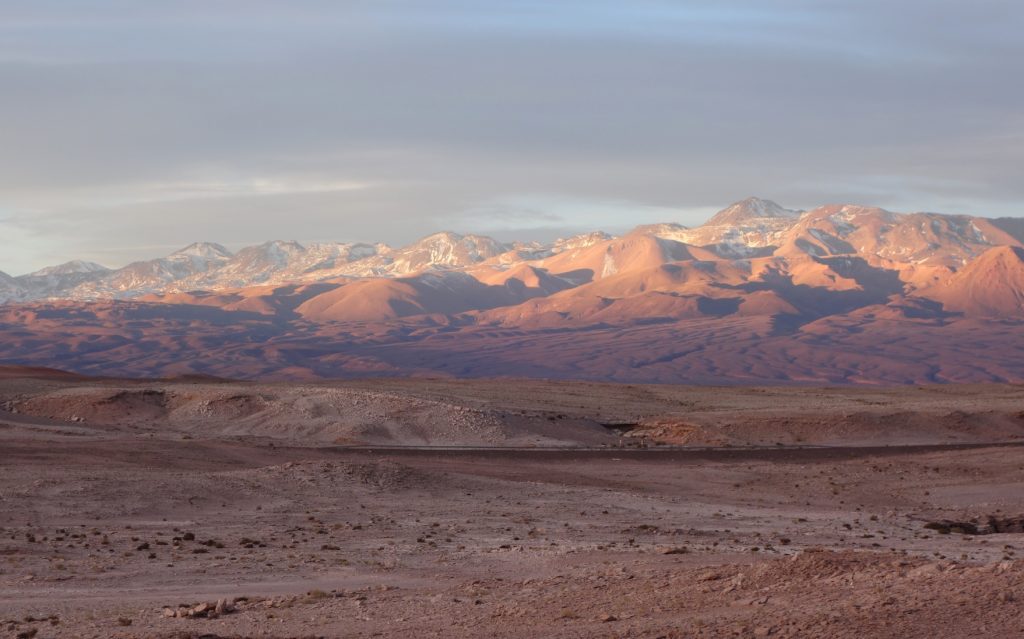 On our second day, we went to the Puritama hot springs. These are a series of 8 geothermal spring water pools. We spent about 3 hours in the water enjoying the nice views and had a light snack after that. 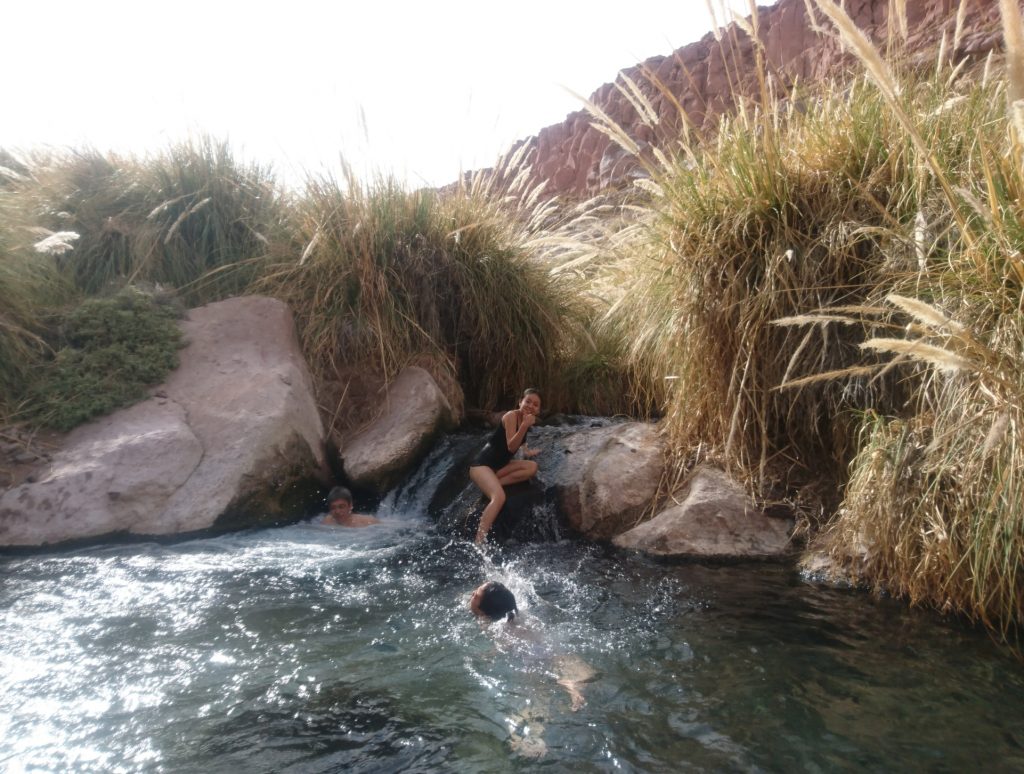 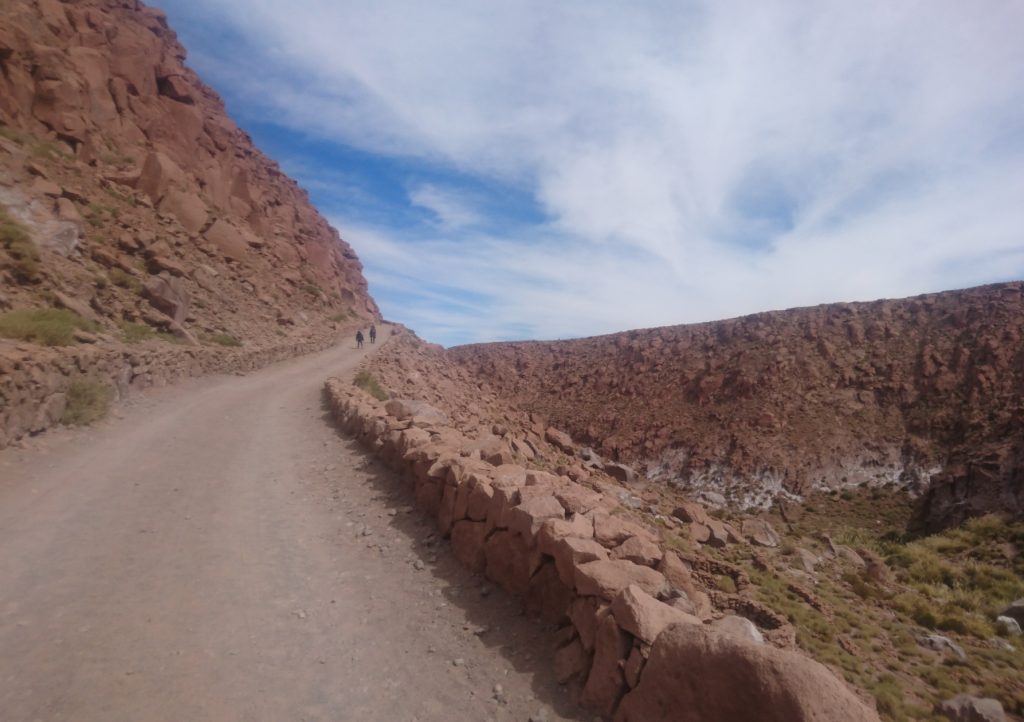 In the afternoon, we went to the Cejar Salt Lake, I didn’t go in the water because I have sensitive skin, but you can go swimming and float of the surface (similar to the dead sea). 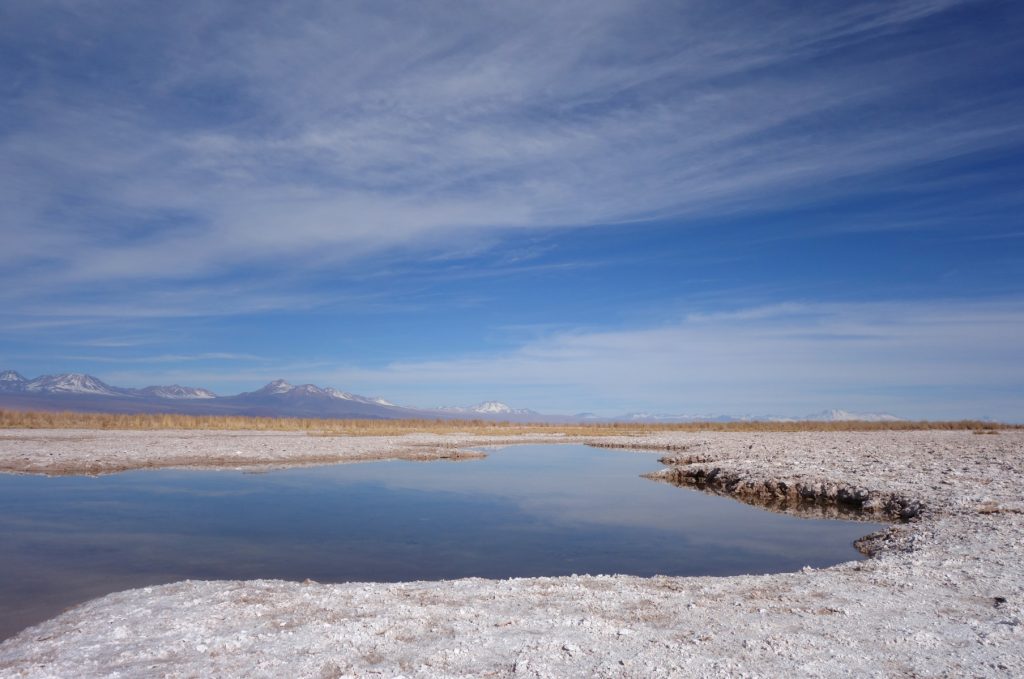 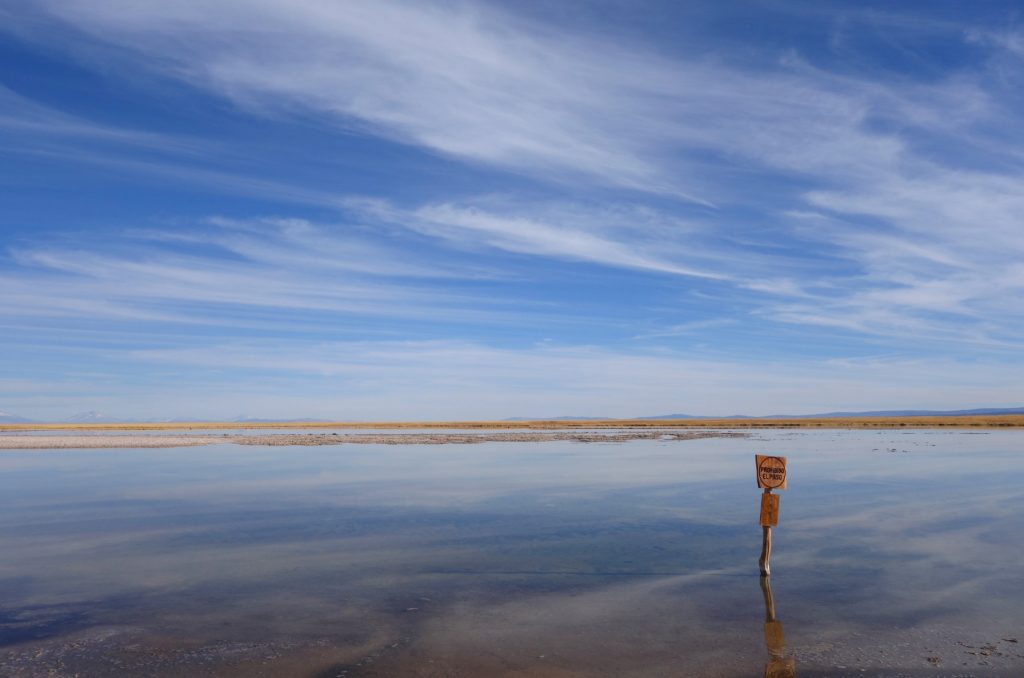 The next day we headed to Los Flamencos National Reserve, a natural reserve that covers the total space of 740km squared. The valley of the moon is also part of this natural reserve but this time we went to see the flamingos.

We saw llamas on our way back. Since llamas are domestic animals, you can pet them, or get close enough to take good pictures.

Finally, on our last day, we went to see the “rainbow valley”, named after its multiple colour mountains formed by different types of soil. We also saw wild vicuñas, which unlike llamas are wild animals so they will run away if you get too close.

And finally, we went to see these drawings on the wall done by the indigenous people. If you look closely you can see llamas and people. In some other places, you can see drawings of monkeys, which don’t exist in the desert, so it is thought that these people had connections with people in the amazon.

This trip was a very refreshing experience since the past few years my family and I had only been doing relaxing trips to cities and towns in Europe. Although half of my family prefers more indoor activities, I enjoyed this trip since I got to learn a different side of Latin America.